Have a Sweet Day!

Michigan Sugar Company is a cooperative owned by nearly 900 farmers in Michigan and Ontario, Canada. It is our pleasure to introduce you to a few of them. 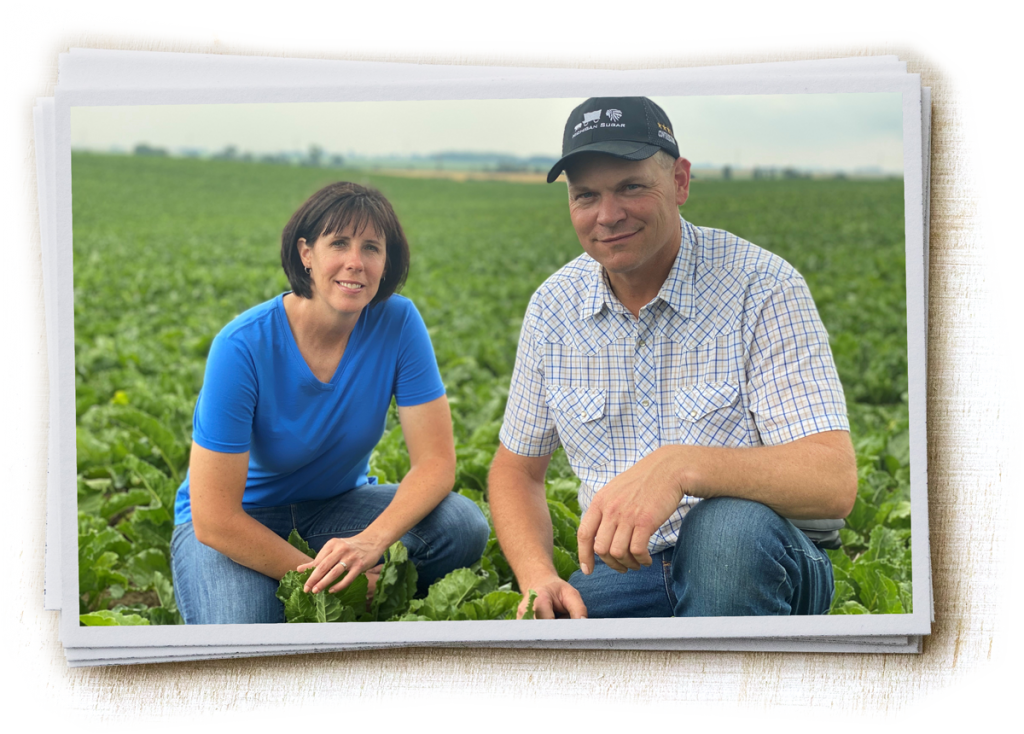 At age 5, Chris Guza knew he wanted to be a farmer.

Today, he and his wife Angie own Guza Farms LLC, a 2,800-acre operation based in Ubly, Michigan, with land in Huron, Sanilac, and Tuscola counties.

Along with their children – Abbie, Grant, and John – the Guza family annually plants and harvests 850 acres of sugarbeets that become pure, all-natural Pioneer Sugar. They also grow corn, wheat, and edible dry beans.

“In our family we like to say we make hay while the sun shines,” says Angie Guza. “It’s a lot of hard work and it doesn’t just happen by some miracle. Luckily, we have and have had a great group of employees who are willing to help get the job done because when something needs to be done, you do it.

“Your whole life is invested in what you’re doing.”

Chris and Angie also are involved in their community and their church – St. Mary’s-St. Isidore Catholic Church in Parisville, where Angie serves on the Finance Council and teaches religious education classes and Chris is a member of the Men’s Club.

Guza Farms was one of the first in Michigan to earn Michigan Agriculture Environmental Assurance Program certification through a voluntary program that honors farms with strong sustainability practices. 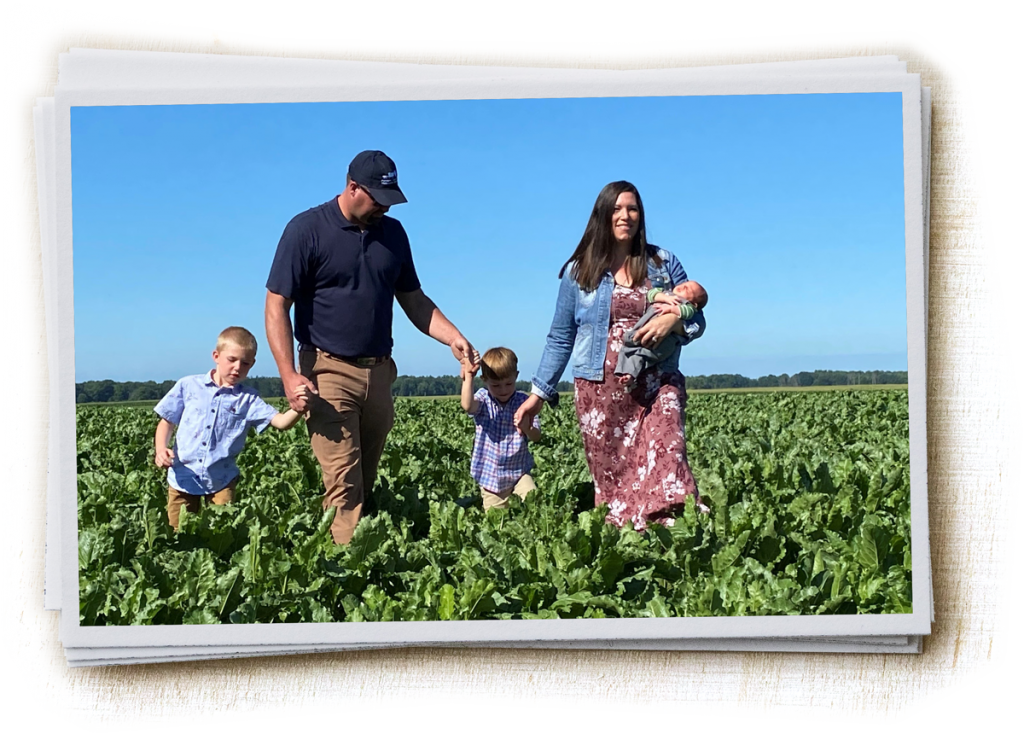 Peter Maxwell is a third-generation sugarbeet grower hoping to see his sons become the fourth generation of the Maxwell family to farm in Michigan.

“My grandfather started raising beets 80 years ago and my mom’s dad also raised sugarbeets,” says Maxwell, who established Peter Maxwell Farms in Hope, Michigan, in 2008. “I have three sons and I hope someday they’ll be able to farm.”

Peter and his wife Allyson oversee the farm that comprises 1,250 acres in northern Midland and southern Gladwin counties. They grow 175 acres of sugarbeets, as well as corn, soybeans, and wheat. Peter serves as Vice President of Michigan Sugar Company’s West District Board of Directors.

“Being a pioneer to me is part of my family’s legacy,” says Peter Maxwell. “It’s remembering what my grandfather started, but also planning on … how my kids can impact our farm.

“Pioneer Sugar is the linkage between our farm and your kitchen.”

Peter and Allyson are parents to Mason, Calvin, and Boone.

“I know that as a cooperative, as a family, as a group of growers, we have put our best effort forward to raise a pure and natural and safe product that’s going to be in that bag that’s going to end up feeding your kids,” says Allyson Maxwell. “That is 100% our priority.” 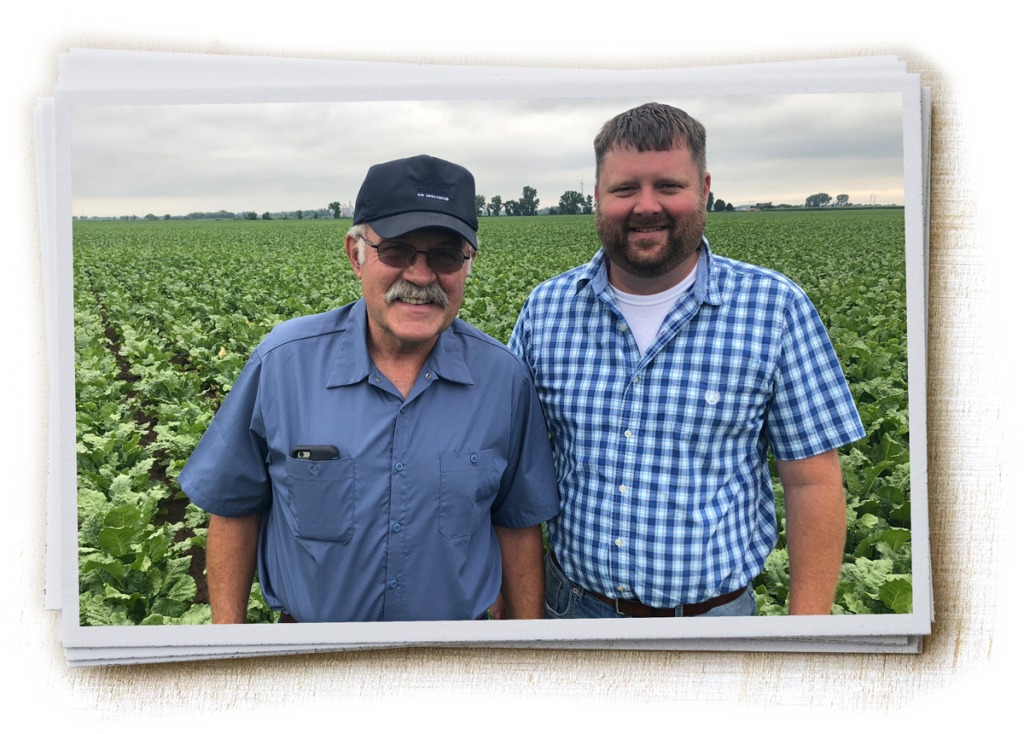 If you are talking about five-generation farm families that have a long-standing relationship with Michigan Sugar Company, you could say Adam Herford’s family wrote the book.

And if you visit the Herford farm, located in Oliver Township just north of Elkton in Huron County, that little book filled with family history is likely to come out in helping tell their story.

Today, Adam Herford oversees the family’s farm operation that includes about 1,900 acres of sugarbeets, a crop Adam says has “made the good times better and the hard times not so hard.” The family also grows alfalfa, navy beans, white wheat, corn, and soybeans and raises cattle.

“Growing sugarbeets is a unique opportunity that over the years has really helped our farm grow to where it is today,” said Adam, 39, who graduated from Laker High School in nearby Pigeon in 1997 and went on to earn his bachelor’s degree in agribusiness management from Michigan State University in 2001.

Adam serves as Chairman of the Michigan Sugar Company Board of Directors. In serving on the board, he follows in the footsteps of his father William “Bill” Herford, who served the board from 2002 to 2018.

“They hauled the beets to Elkton and threw them off wagons into train cars,” said Bill Herford. “Then, the beets went to Sebewaing.”

Welland and Grace Herford, Adam’s grandparents, were the third generation to run the farm and incorporated the operation – still known today as W.A. Herford & Sons Inc. – in 1971.

Bill and the late Pauline Herford, along with Bill’s brother and sister-in-law Jim and Kim Herford, were next to run the farm. Pauline Herford died in 2000 after a battle with cancer. Bill married Barb Herford in 2004 and remains active in the farm although control has been passed to Adam and his brother Luke, along with Adam’s Cousin Brandon (Jim’s son).

“It’s a real family operation,” said Adam. We work closely with other family members to make sure the farm moves forward.”

Among the farm’s endeavors is a partnership with four other farms called Allied Farm Enterprises Inc. that supplies feed to four dairies in Huron and Sanilac counties.

Adam also has represented the farm on several statewide and community levels. He served nine years as a board member for Huron County Farm Bureau and four years on the Michigan Farm Bureau’s Young Farmer Committee, including two years on the Executive Committee. He also is a member of the Elkton Lions Club.

Adam said he and his brother and cousin all take leadership with different roles on the Herford farm and he envisions a day when the sixth generation of the family is leaving its mark on the operation.

Luke and Rita Herford have two young daughters – Alexis and Lauren – and Brandon Herford and his wife Sherry are parents to a daughter named Isabella.

Asked if one of those kids might one day run the farm, Adam doesn’t hesitate: 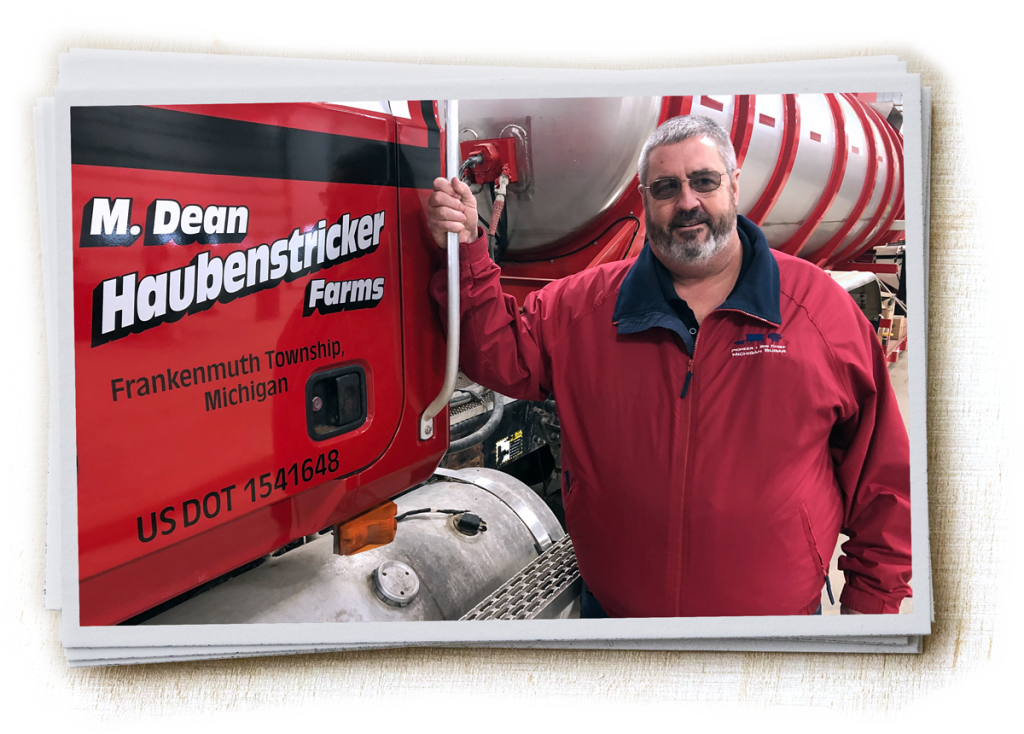 As a young boy at St. Lorenz Lutheran School in Frankenmuth, Dean Haubenstricker remembers looking out the window of his classroom onto a 10-acre field being harvested by his father. It was almost more than he could stand and that feeling of wanting to be outside farming continued in high school.

“I was the one looking out the window wondering why I was in here,” said Haubenstricker. “There was never any doubt what I wanted to do.”

What he wanted to do was become the fifth generation of his family to farm. Today, Haubenstricker and his family run M. Dean Haubenstricker Farms, a 2,300-acre operation specializing in sugarbeets, corn, soybeans, and dry beans. The family also grows wheat and rye from time to time.

Dean and his wife Donna were married in 1997 at St. Lorenz Church in Frankenmuth. They have three children – Joshua, Samuel, and Simon

Dean goes by his middle name. His first name is actually Maynard (thus M. Dean Haubenstricker Farms). He is named after his father whose first sugarbeet crop was grown in 1958. Dean says from the time he was a little boy, he never wanted to be far from his father’s side, especially if he was working on the farm.

In 1983, Dean attended a Michigan Sugar breakfast meeting with his father and won a 10-pound bag of sugarbeet seed that morning as a door prize.

Today, Dean’s family grows about 500 acres of sugarbeets, a crop he says, “has always interested me the most.” He also said sugarbeets are the most important crop he grows.

“They have done the most for moving our farm forward.”

Pioneer Sugar is the brand of Michigan Sugar Company, a cooperative owned by nearly 900 farmers from Michigan and Ontario, Canada. The company has been extracting pure, all-natural sugar from sugarbeets since 1906. We are proud of our past and excited about our future. Learn more about our company at www.michigansugar.com.